Cyanide and carbon monoxide are both deadly poisons to humans, but compounds containing iron, cyanide, and carbon monoxide discovered in carbon-rich meteorites by a team of scientists at Boise State University and NASA may have helped power life on early Earth. The extraterrestrial compounds found in meteorites resemble the active site of hydrogenases, which are enzymes that provide energy to bacteria and archaea by breaking down hydrogen gas (H2). Their results suggest that these compounds were also present on early Earth, before life began, during a period of time when Earth was constantly bombarded by meteorites and the atmosphere was likely more hydrogen-rich.

“When most people think of cyanide, they think of spy movies – a guy swallowing a pill, foaming at the mouth and dying, but cyanide was probably an essential compound for building molecules necessary for life,” explained Dr. Karen Smith, senior research scientist at Boise State University, Boise, Idaho. Cyanide, a carbon atom bound to a nitrogen atom, is thought to be crucial for the origin of life, as it is involved in the non-biological synthesis of organic compounds like amino acids and nucleobases, which are the building blocks of proteins and nucleic acids used by all known forms of life.

Smith is lead author of a paper on this research published June 25 in Nature Communications. Smith, along with Boise State assistant professor Mike Callahan, a co-author on the paper, developed new analytical methods to extract and measure ancient traces of cyanide in meteorites. They found that the meteorites containing cyanide belong to a group of carbon-rich meteorites called CM chondrites. Other types of meteorites tested, including a Martian meteorite, contained no cyanide.

“Data collected by NASA’s OSIRIS-REx spacecraft of asteroid Bennu indicate that it is related to CM chondrites,” said co-author Jason Dworkin of NASA’s Goddard Space Flight Center in Greenbelt, Maryland. “OSIRIS-REx will deliver a sample from Bennu to study on Earth in 2023. We will search for these very compounds to try to connect Bennu to known meteorites and to understand the potential delivery of prebiotic compounds such as cyanide, which may have helped start life on the early Earth or other bodies in the solar system.”

Cyanide has been found in meteorites before. However, in the new work, Smith and Callahan were surprised to discover that cyanide, along with carbon monoxide (CO), were binding with iron to form stable compounds in the meteorites. They identified two different iron cyano-carbonyl complexes in the meteorites using high-resolution liquid chromatography-mass spectrometry. “One of the most interesting observations from our study is that these iron cyano-carbonyl complexes resemble portions of the active sites of hydrogenases, which have a very distinct structure,” Callahan said. 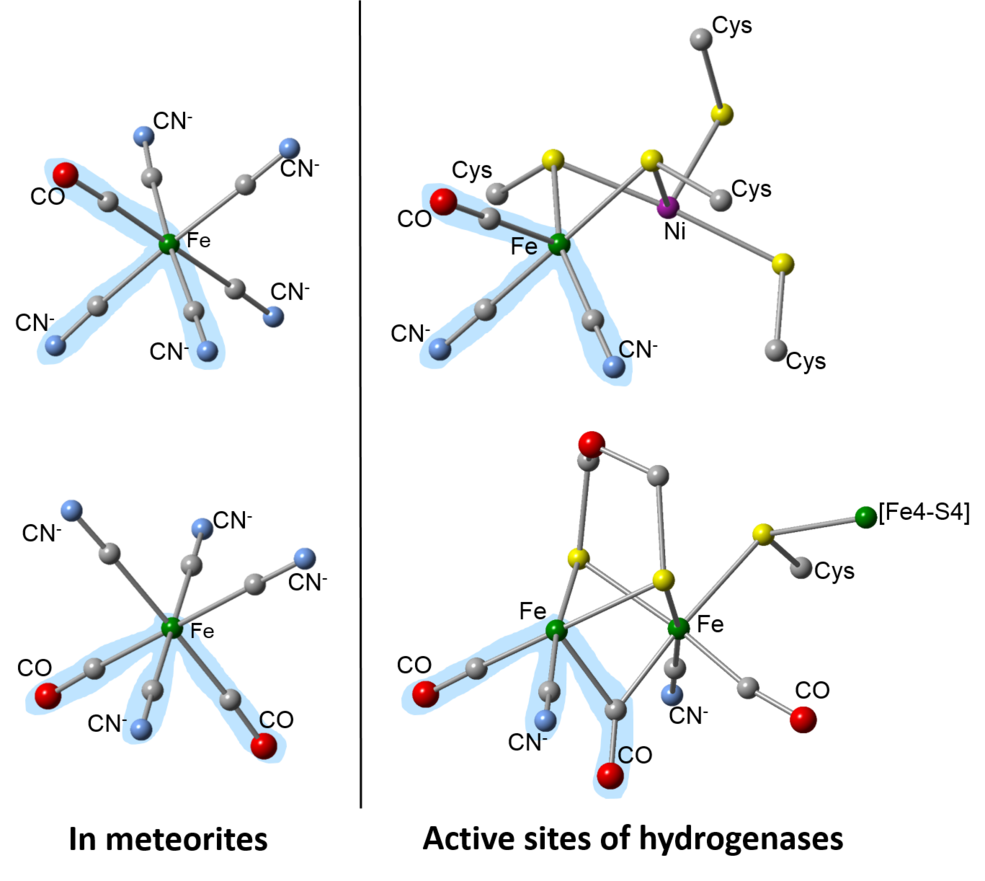 Hydrogenases are present in almost all modern bacteria and archaea and are widely believed to be ancient in origin. Hydrogenases are large proteins, but the active site – the region where chemical reactions take place – happens to be a much smaller metal-organic compound contained within the protein, according to Callahan. It is this compound that resembles the cyanide-bearing compounds the team discovered in meteorites.

An enduring mystery regarding the origin of life is how biology could have arisen from non-biological chemical processes. The similarities between the active sites in hydrogenase enzymes and the cyanide compounds the team found in meteorites suggests that non-biological processes in the parent asteroids of meteorites and on ancient Earth could have made molecules useful to emerging life.

“Cyanide and carbon monoxide attached to a metal are unusual and rare in enzymes. Hydrogenases are the exception. When you compare the structure of these iron cyano-carbonyl complexes in meteorites to these active sites in hydrogenases, it makes you wonder if there was a link between the two,” Smith added. “It’s possible that iron cyano-carbonyl complexes may have been a precursor to these active sites and later incorporated into proteins billions of years ago. These complexes probably acted as sources of cyanide on early Earth as well.”